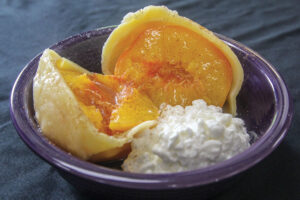 My family would drive to Upstate New York during the 1960s and 1970s to visit my first generation Czech-American maternal grandparents.  At least one meal during our summer vacation would include these wonderful dumplings as the main course.  My grandma’s small house out in the countryside would smell very fragrant while the peaches were boiling on her stove top.  The moist, elastic dough holds the fresh peaches together.  They are served with melted butter and a side of cottage cheese, which had a sugar and cinnamon mixture sprinkled on top.  The dinnertime beverage was always cold milk served in her colorful aluminum tumblers, which would frost up as soon as the milk was poured.

Serves 6 – One dumpling per serving

Mix egg with butter and milk.  Add salt.  Sift flour on a board and add first mixture, kneading until smooth.  Cut dough into small pieces and wrap one piece evenly around each peach.  It is not necessary to remove the pit, but my grandma always mentioned that the pit was still there.  Seal well all around.  Drop dumplings in a large pan of boiling salted water and cook for about 8 minutes.  Do not overcook.  Remove from water immediately, sprinkle with melted butter and keep in a colander over hot water until ready to serve.  Arrange on a platter, sprinkle with some more melted butter and sugar.  Crumbled pot cheese (cottage cheese), cinnamon and sugar mixed together, or ground poppy seeds fried in butter can be used for toppings.